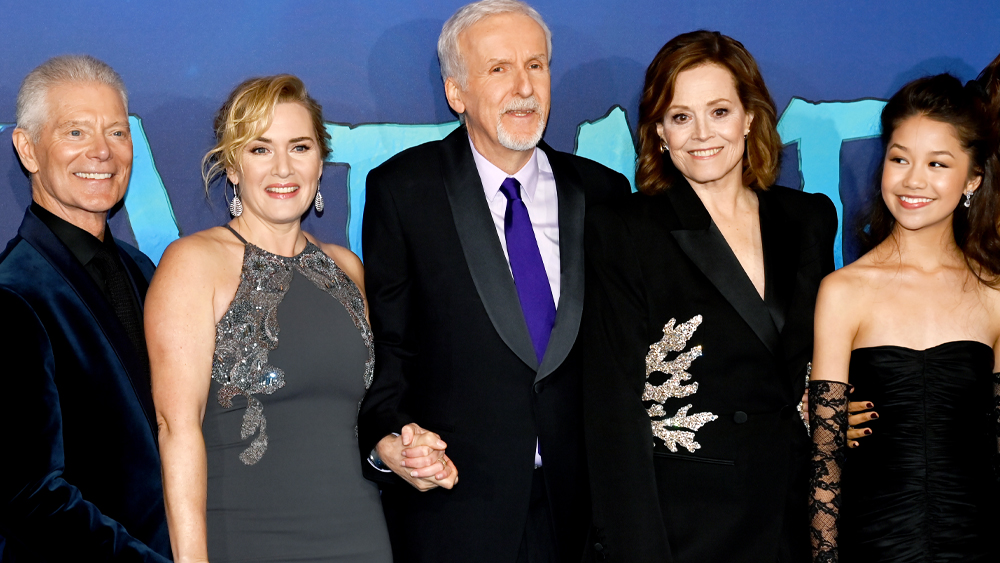 Almost 13 years to the day after James Cameron unveiled his 3D sci-fi epic Avatar in London’s Leicester Square, the filmmaker is back in town to present the world premiere of sequel Avatar: The Way of Water.

Attendees to Tuesday’s massive undertaking including director/producer/co-writer Cameron, producer Jon Landau and cast members Sigourney Weaver, Sam Worthington, Zoe Saldana, Stephen Lang and Kate Winslet strolled a blue carpet laid out in the square ahead of the premiere this evening.

The 20th Century Studios picture is actually screening simultaneously in two cinemas in Leicester Square tonight, such was the anticipation for the follow-up to the world’s highest-grossing movie ever.

The Way Of Water At London World Premiere

From the stage inside the Odeon West End, Cameron said: “Thanks for coming. I don’t know about you, this is a pretty surreal moment for me that we are done with the film. Five years of production and five years spanning a really dark period. The pandemic hit, we were shut down completely. I was despairing this art form I love that I dedicated four decades to was over. We finally got back to work but we didn’t know if there would be movie theaters. Was it over? But here we are.

“Theaters are full again and moviegoers of the world have declared resoundingly that we need this. We need this ability to gather together to sit in these great dark spaces and to dream together with our eyes wide open in a cinema. To me tonight is not about a new Avatar film. It’s about cinema, and here you are in your black-tie finery. It’s a celebration of this art form that we love so much. It’s back it’s alive and it’s as great as it’s ever been.”

While Cameron and Landau were speaking in that smaller venue, attendees around the corner at the Odeon Leicester Square were treated to music by a live orchestra. Cameron and Landau then hoofed it back to the main cinema and took to the stage with cast in tow ahead of the screening.

Cast and filmmakers have been in London since Sunday promoting the movie, which Disney starts rolling out globally beginning December 14, with domestic joining on December 16.

Avatar: The Way of Water is set more than a decade after the events of the first film. It centers on the Sully family (Jake, Neytiri and their kids), the trouble that follows them, the lengths they go to keep each other safe, the battles they fight to stay alive and the tragedies they endure as they strive to protect their home on Pandora.

Disney, Cameron and Landau have been making the rounds with footage from the film, screening during June’s CineEurope conference in Barcelona and at D23 in September as well as for execs from China Film Group (a China release has been confirmed day-and-date with North America on December 16).

Disney also released a remastered 4K HDR version of the original film in September to set the table for the sequel, and included sneak footage tagged onto the end.

Avatar: The Way of Water hit tracking last month with a projected opening of at least $150 million. Tracking has it higher near $175M, but rivals are bullish at $200M. Advance tickets went on sale two weeks ago for the pic, which is 3 hours and 12 minutes long.

The 2009 original grossed $2.9 billion at the global box office and after a few re-releases is the highest-grossing film of all time. Domestically it is at $785.2M, where it ranks as the fourth highest all time.