T.J. Holmes & Amy Robach Are ‘Laying Low’ As ABC Is Torn On The Fate Of Their GMA Careers! 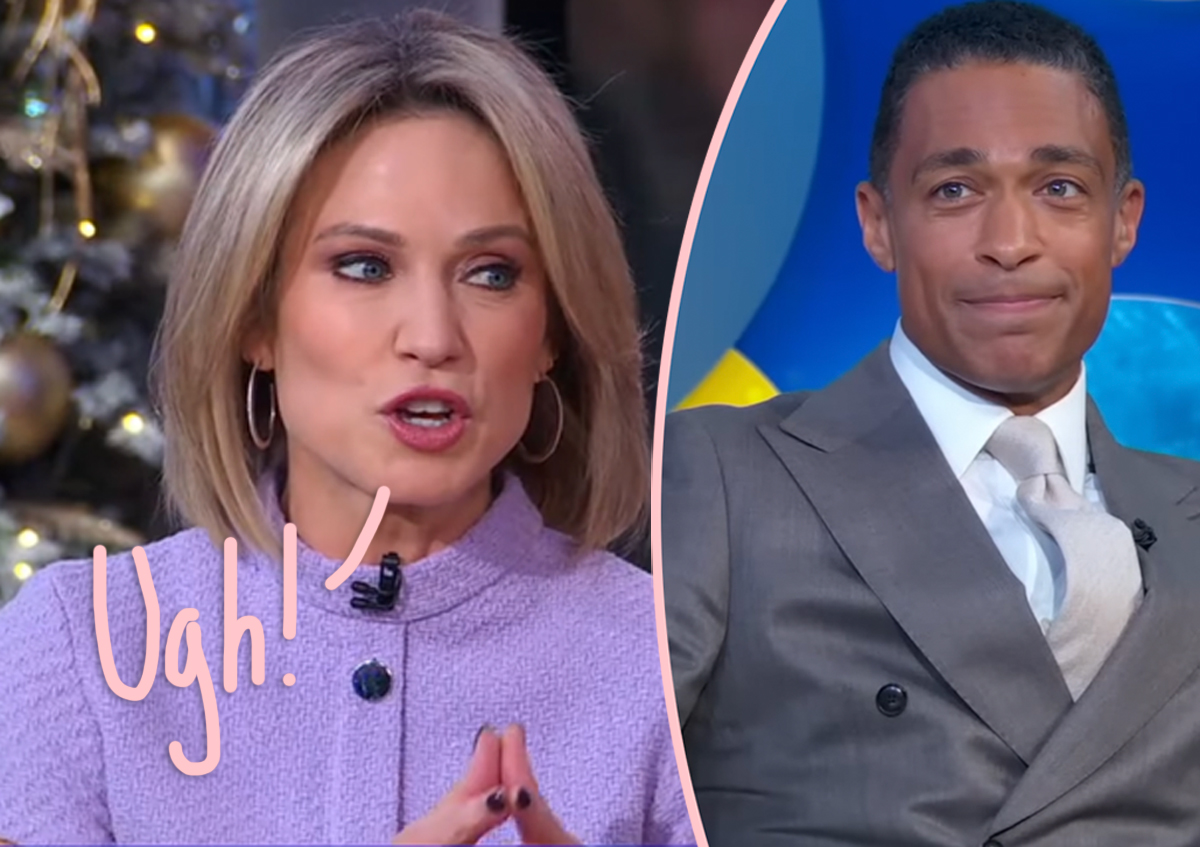 Things aren’t looking good for T.J. Holmes and Amy Robach – at least when it comes to their futures with Good Morning America!

By now you have most likely heard that the two co-anchors’ months-long relationship came to light this month when videos and pictures dropped of them getting cozy together — while they still were married. The exact timeline of their romance is unclear, but sources insist the two did not become romantically involved until they broke up with their respective partners, Marilee Fiebig and Andrew Shue.

However, that might not necessarily be the case! Page Six previously reported that T.J.’s wife was “blindsided” by the news as they were trying to work things out. Meanwhile, another source claimed to Entertainment Tonight that she started questioning the 45-year-old journalist’s friendship with Amy while on vacation in the Bahamas for his birthday:

“They had already been through so much trying to fix their marriage after his affair with the former GMA producer and then she saw a birthday card from Amy that was way too familiar.”

It’s been a messy situation, to say the least, especially now that reports have come out about T.J. also having an affair with married GMA producer Natasha Singh and another woman from the network in the past. Beyond that, ever since the pair were taken off the air this week, they also have not been seen together again – leading many to wonder if things are still solid between them. Fortunately, an insider has come forward to give an update on Amy and T.J.’s relationship to ET. They said that the twosome “are definitely together right now,” but are keeping “a low profile” for the time being:

“Both T.J. and Amy are trying to keep a low profile and let the dust settle. It’s still unclear as to what, if any disciplinary action might be taken, but for now, both are laying low, and trying to move on with life.”

As we previously reported, an “internal investigation” was launched into T.J.’s affair with Natasha in order to determine whether he violated the relationship clause of his contract regarding bosses and subordinates. ABC is also looking into his and Amy’s relationship to see if they’ve breached any policies, like using company resources to romantically meet up or pressuring their co-workers to keep their situation a secret.

No more updates have been made about these investigations at this time, so for now, they are suspended “indefinitely” with Stephanie Ramos and Gino Benitez taking over for them at GMA 3: What You Need to Know. However, it seems many staff members desperately want to know what’s going to happen to the reporters’ positions at the network, especially Robin Roberts. In fact, a source spilled to Dailymail.com on Friday that the 62-year-old host is “furious” about the “messy” affair between Amy and T.J., as she told them to “knock it off” when she found out. But more than that, she finds that the scandal is “tainting the brand.” Ouch…

She reportedly has shared her concerns with her bosses, and even complained to Disney about the response to the situation. However, insiders told the outlet that the heads are in complete turmoil about what to do with Amy and T.J. right now, as they would like to keep her on the show. But when it comes to T.J? Well, it sounds like they are leaning towards firing him but worry about the backlash they’d face:

“There’s been all these stories about T.J. being a serial cheater with at least one other affair and hints that there are more. But how can they let him go and keep Amy? They love her and they don’t want to lose her. But imagine the possible backlash if they go down that path. Letting the black man go and keeping the white woman? It looks like the worst sort of double standard and would leave them wide open to allegations of racism.”

Another insider noted to the outlet that ABC News‘ President Kim Goodwin is feeling “hopeless” right now as she cannot figure out how to proceed:

“She’s just busy making sure her best interests are covered and doesn’t seem to be able to come to any decision at all. She’s totally unavailable and mostly hiding in her office.”

Meanwhile, one source then said that execs are concerned about the precedent it would set if they fired Amy and T.J.:

“If Amy and T.J. are punished for their affair they’ll have to bring a prison bus to the studios to ship out all of the other couples who’re at it at ABC!”

A former ABC producer revealed that the newsroom was “a hotbed” for indiscretions, saying:

Even Disney Chief Executive Officer Bob Iger met his wife, Willow Bay, when he was the President of ABC while she was a GMA presenter! Plus, given the reports about T.J.’s alleged office affairs, the former producer’s comments don’t surprise us!

We’ll have to see what happens with T.J. and Amy’s careers at GMA. Reactions, Perezcious readers? Do you think they’ll be kicked off the show permanently, or do you believe they’ll be back once the dust settles with the scandal? Drop your thoughts in the comments below.