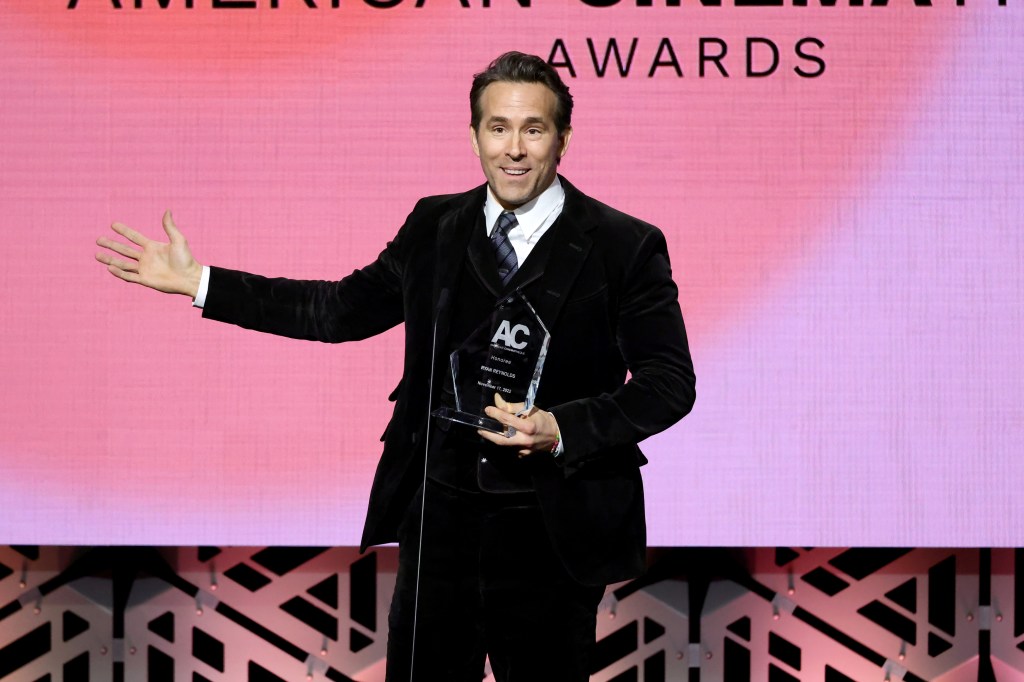 Even though we were right in the heart of Beverly Hills for last night’s American Cinematheque Awards tribute to Ryan Reynolds, you would be forgiven if you thought somehow you had been transported from the Beverly Hilton International Ballroom to Canada. Judging from these proceedings, Reynolds just may be the hottest import ever to come across the border.

Numerous presenters and participants, notably Reynolds’ very pregnant wife Blake Lively (they have three daughters with another child on the way) made mention of the fact that the star of Deadpool, Free Guy, and other hits has never ventured far from where he really considers “home” and that is his native Canada, and she added he is the first Canadian recipient of the award in its 36 years of existence. I can’t remember the last time I sat at a Hollywood tribute like this one and felt compelled to stand and sing the entire Canadian National Anthem (they could have put the lyrics on the screen for us non-Canadians in the crowd). That closely followed enthusiastic taped remarks from Canadian Prime Minister Justin Trudeau, who lauded the actor. This guy is bigger than Hockey. At least that is the impression I got.

Among those appearing in person to toast and roast — but surprisingly not too much — Reynolds were Mary Steenburgen (who played his mom in The Proposal), Nathan Fillion (yet another Canadian) who co-starred with him in the ABC sitcom Two Guys, A Girl, And A Pizza Place, and Octavia Spencer, who is a current co-star in the new Apple TV+ holiday movie Spirited. But as she noted, she first worked with Reynolds in a bit role as a crackhead credited only as “streetwalker/pedestrian” in The Nines. Another current Spirited co-star, Will Ferrell, was first to speak.

“This is an award given to an extraordinary artist in the entertainment industry,” said Ferrell, before wondering, “What happened? Who fell through?”

Fillion got laughs by noting he has a habit of pre-writing eulogies for his friends and then proceeded to read one he wrote for Reynolds. His current bromance with Welcome to Wrexham buddy and partner Rob McElhenney was on full display in remarks from the latter that bordered on a love letter.

Producer-director Shawn Levy, who has made Free Guy, The Adam Project and is doing the upcoming Deadpool 3 with Reynolds and Hugh Jackman — “if it doesn’t work we will blame Jackman,” laughed Levy — was very funny and sincere as he made the presentation to the star who seemed genuinely touched by all the attention.

“I’ve never taken myself too seriously. It creates a pretty astounding paradox that I am being celebrated by a very serious awards show,” Reynolds said modestly. “I was standing in this exact room eight years ago when Jeff Bridges wrapped his arms around me and looked around a room full of executives, movie stars, producers and proclaimed, ‘This is our tribe, man!’ ” Reynolds said he rejected that at first but has since come to realize the show business community is a “tribe” and he is proud to be part of it.

Among the video tributes, the hilarious one from Reynolds’ R.I.P.D co-star Bridges was a real highlight. Jackman, on stage in The Music Man, delivered one featuring his son as Deadpool, Salma Hayek, Helen Mirren, and Monica Baccarin also filmed tributes that were weaved in among numerous clip packages spotlighting different aspects of the tributee’s career that showed off the versatility that has turned him into a top star.

Before the main event Blumhouse founder and producer Jason Blum took the stage as both the company and its leader were the recipient of the American Cinematheque Power Of Cinema Award. The gong was presented by Universal’s Filmed Entertainment Group Chairman Donna Langley after a terrifying reel of Blum’s trademark horror films was shown. The studio head — who has counted on Blum as a key producer for the past decade of some very big Universal hits including the Oscar-winning Get Out, The Black Phone, The Purge franchise, the recent Halloween trilogy and so many more — admitted she is so frightened by horror films she couldn’t watch the reel, but nevertheless had nothing but praise for the prolific producer who in accepting the honor expressed his gratitude and noted that “awards for horror films are few and far between”.

The evening opened with remarks from American Cinematheque Chairman Rick Nicita and President Mark Badagliacca, along with Board member and Founder and CEO of Hill Valley, Eric Nebot. The Cinematheque is currently operating the Aero and Los Feliz theaters for their various film programs, and are restoring their other venue — with Netflix — the world famous Egyptian Theatre which will reopen next year with a celebration of its first 100 years.