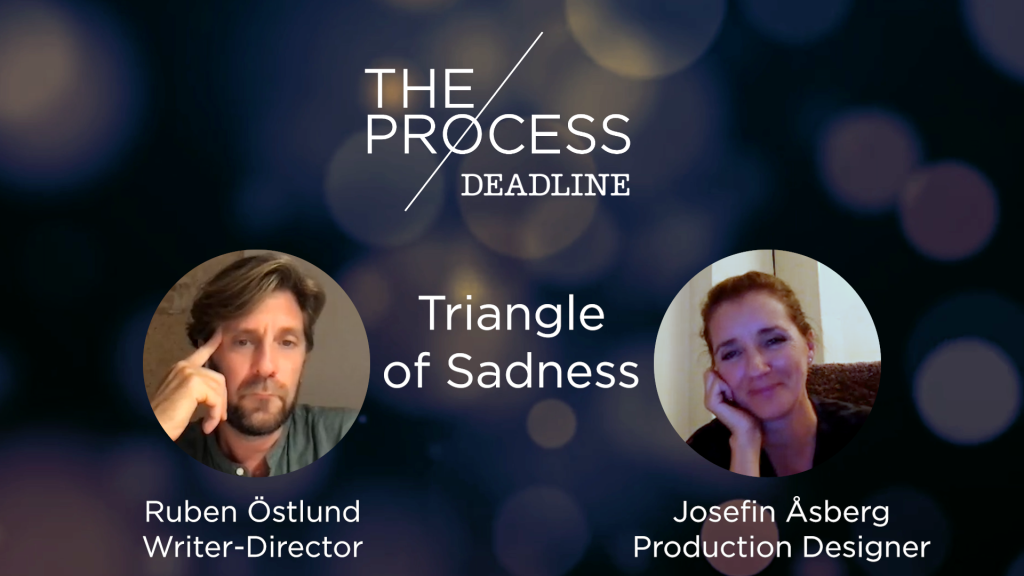 Ruben Östlund, Josefin Åsberg Talk ‘The Entertainment System Is Down

One of the best qualities of production designer Josefin Åsberg, per Triangle of Sadness filmmaker Ruben Östlund, is that she’s “completely crazy.” This is perhaps the fondest compliment the Swedish filmmaker can offer his collaborators, referring to the ability to thrive in the face of seemingly insurmountable challenges.

“It’s a fantastic thing to work with you because it seems there have been no limits so far. Whatever you ask for, Josefin [is] up to it,” Östlund observes in conversation with Åsberg for MovieSlay’s video series, The Process. “So, I don’t know where to go from Triangle of Sadness. Is there anything more we really can push when it comes to the set design?”

The dark comedy Triangle of Sadness is the third film Östlund and Åsberg have made together — on the heels of Force Majeure (2014) and The Square (2017) — and their second in a row to claim the Cannes Film Festival’s Palme d’Or. It watches as the social hierarchy is turned upside down, revealing the tawdry relationship between power and beauty. Celebrity model couple, Carl (Harris Dickinson) and Yaya (Charlbi Dean), are invited on a luxury cruise for the uber-rich, helmed by an unhinged boat captain (Woody Harrelson). But what first appeared instagrammable ends catastrophically, leaving the survivors stranded on a desert island and fighting for survival.

The “magnum opus” of Åsberg’s Triangle of Sadness design work, per Östlund — representing a kind of challenge they’d never before faced together — was a luxury yacht dining room interior built on stage. The set placed on a gimbal would allow him to pull off a climactic sequence involving a storm at sea, which would send furniture sliding around the room and trigger a mass vomiting incident, along with flooding and power outages.

Orchestrating sequences like this with Åsberg by his side has had a profound effect on the filmmaker, he admits — affording him a sense of confidence with studio work that he hadn’t come to on his own. “I think that before I started to work with you, I was a little bit scared of going into the studio because I was afraid that it was going to feel artificial,” Östlund tells his designer. “But then as soon as I got the experience of working in the studio, you understand how much more concentrated you can be and how great it is for the working conditions that I don’t have to deal with anyone that is maybe disturbing, or that we have to adjust our shooting time for someone else. So, in our working collaboration, I have definitely gotten more confident in working in the studio.”

Released in the U.S. in October, Triangle of Sadness also stars Dolly De Leon, Zlatko Burić, Henrik Dorsin and Vicki Berlin, among others. Östlund directed his first English-language feature from his own script, with Erik Hemmendorff and Philippe Bober serving as its producers.

In conversation with Östlund on The Process, Åsberg delves into her art studies and entrée into production design, her collaboration with the director on his first two films, the extreme level of detail she aims to bring to sets, the history of the yacht Christina O employed for Triangle of Sadness exteriors and her approach to the film’s storm sequence, Östlund’s unique approach to location scouting, and more.

Topics touched on by Östlund include his own graphic design background, how he initially came to connect with Åsberg, set visits from his mentor Kalle Boman, and how setting up the Triangle of Sadness gimbal set was akin to “building a rollercoaster.” The filmmaker also addresses his next feature, The Entertainment System is Down, which he describes as “an epic movie that takes place in an airplane,” and why the cinematic “chamber play” is “probably the hardest thing” he’s tackled to date.

Watch the conversation in full above.