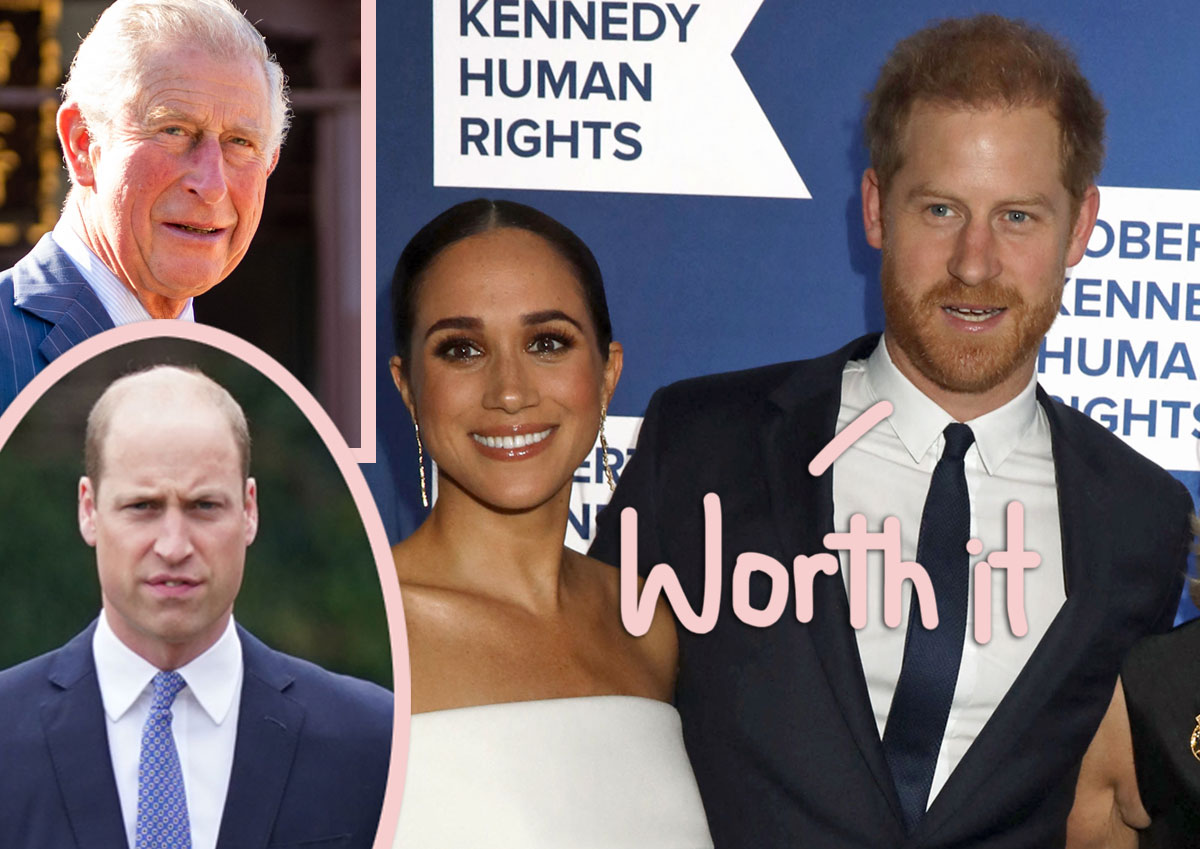 The royal family may not be pleased with Prince Harry and Meghan Markle’s attacks, but an award show is!

Just two days before they are set to release the first part of their explosive Netflix docuseries, Harry & Meghan, the Duke and Duchess of Sussex stepped out for a rare night on the town while attending the Ripple of Hope Gala in New York City on Tuesday night! And get this: they were literally honored for exposing their royal family members!!

Related: Harry Blasts Claim He Said ‘Those Brits Need To Learn A Lesson!

The pair was all smiles when they stepped out of a car on a rainy night in the Big Apple to head to the Robert F. Kennedy Human Rights Foundation event. The mother of two looked dazzling in a white off-the-shoulder dress with long sleeves by Louis Vuitton. She was also sporting Princess Diana‘s famous aquamarine ring. Her hubby kept it classic in a black suit and tie. Despite the frenzy of attention when they arrived, the Suits alum didn’t even bat an eye at a heckler who claimed she was to blame for “destroying the royal family.” Oof! Ch-ch-check out their entrance (below).

The gala highlights leaders who have shown a commitment to “equity, inclusivity, and sustainability in the workplace and the world,” per the org’s website. Believe it or not, Harry and Meghan were essentially honored for calling out their family members for being racist and not taking their mental health concerns (specifically Meghan’s suicidal thoughts) seriously before their exit from the institution. You’ll remember they revealed this in a bombshell Oprah Winfrey interview. Of course, the Robert F. Kennedy Human Rights Foundation couldn’t just give them an anti-racism award because they’ve talked smack about the royal family, so they were celebrated for the social efforts they’ve enacted through their non-profit Archewell Foundation, the company they founded after departing their roles as senior working royals in 2020.

While honoring the couple, the gala commended them for having “demonstrated a lifelong commitment to building strong and equitable communities” and openly embracing conversations surrounding mental health and racial justice. Kerry Kennedy, the organization’s president, shared in an October press release:

“The couple has always stood out for their willingness to speak up and change the narrative on racial justice and mental health around the world. They embody the type of moral courage that my father once called the ‘one essential, vital quality for those who seek to change a world that yields most painfully to change.’”

So essentially, their decision to put the royal family on blast is being celebrated! Who could have seen that coming?! Late NBA icon Bill Russell, Ukrainian President Volodymyr Zelenskyy and other “exemplary leaders” were also among the night’s award recipients. Previous winners include Barack Obama and Hillary Clinton.

As buzz-worthy as an award like this is for the famous pair, it’s hard not to overlook the timing of the event! With the highly-anticipated docu-series just one day away now, Meghan and Harry have found themselves in the hot seat after they (along with the streamer and their show’s director Liz Garbus) were slammed for using stock images in the trailer for the upcoming show. As we reported, eagle-eyed viewers accused the couple of trying to appear like the victims of the UK’s invasive press, when in reality, several images and videos used in their trailer weren’t related to them at all!

For instance, one image that was supposed to look like they were being bombarded by paparazzi was actually taken at a Harry Potter movie premiere in 2011, several years before they even met. Elsewhere, footage from outside the courthouse of a Katie Price hearing was used as Harry narrated:

“I was terrified, I didn’t want history to repeat itself.”

Royal correspondent Robert Jobson also accused the couple of twisting the narrative by suggesting a photographer once invaded their privacy by trying to snap a photo of baby Archie in 2019 — when it was really an authorized photographer at a press-approved event. After all of this came to light, viewers were quick to slam the royals for misleading their audience, but now someone is coming to their defense!

A source familiar with the project told The Telegraph on Monday the pair had no control over the trailer — and weren’t intending to be manipulative at all, arguing:

“You use stock images to tell a story. It’s not meant to be literal in a trailer.”

They went on to insist the 38-year-old prince and 41-year-old actress had no editorial control of the video but clarified that the use of stock footage is “standard practice in documentary and trailer production.” That all make sense considering trailers are almost never made by the directors or stars of a project, so they really shouldn’t be to blame — yet. We’ll have to wait and see what the docuseries actually reveals first.

At this time, the Sussexes and Netflix have yet to return requests for comment on the scandal, but we bet they’re just waiting for the first three episodes of their series to speak for themselves. Thoughts? We bet The Firm isn’t too thrilled to see the duo get awarded for calling them out! LOLz! Let us know your reactions (below)!

If you or someone you know is contemplating suicide, help is available. Consider contacting the 988 Suicide & Crisis Lifeline at 988, by calling, texting, or chatting, or go to 988lifeline.org.